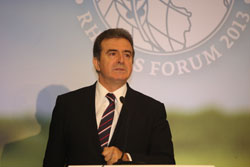 An Address by Michalis Chrisochoidis, Minister of Infrastructure, Transport and Networks of the Hellenic Republic, delivered at the Opening Plenary Meeting of the 11th Rhodes Forum, October 3, 2013

I am honored to be participating in the 11th Rhodes Forum. On behalf of the Government of Greece, I extend to all of you warmest greetings and congratulations for your efforts to build an important global conversation.

This is indeed a much-needed dialogue of civilizations. It encompasses an impressively broad array of themes and ideas. It is a dialogue that focuses on the pressing issues of the World. It draws from the rich lessons of History while decidedly reflecting on the agonies of the day. It is indeed a global conversation conducted on behalf of humanity that richly deserves to be called a dialogue of civilizations.

We live in a world where the pace of scientific discovery and technical innovation is such that changes experienced by us in our own lifetimes far exceed the changes observed for centuries if not millennia in the past. Who could have imagined just a generation or two ago, the power of data and communication networks to instantly connect individuals physically located hundreds or even thousands of kilometers apart. The voice, video and text connectivity widely available to our young people today must have been considered a wild fantasy in the era of our grandparents. Who could have imagined just a short while ago the phenomenal power of transportation networks to deliver with great alacrity and speed products and services ordered from a global marketplace and delivered to our homes and business anywhere in the world?

Ordinary people in everyday business transactions or life situations now command more energy, information and knowledge resources than the most powerful rulers in empires of the past. With the growth of global data, communication and transport networks tectonic shifts are observed in the nature of international arrangements where the protagonists of yesterday find themselves in different and even diminished roles today and conversely.

Consider for example the tectonic shifts observed at present in Europe’s trading networks. Since the Treaty of Westphalia in 1648, the maritime routes of the Atlantic were used to access resources and markets in the Americas and elsewhere. This fact entailed considerable gravity in the emergence of European states and the interstate rivalries at times leading to barbarous wars as observed over the past centuries.

In recent years, the rise of global transport and communications networks, the emergence of the Pacific Rim and South East Asia as the technological epicenter of world manufacturing and the Middle East as the energy hub of the world, have favored alternative routes through the Mediterranean. Combined with the technological possibilities of state-of-the-art additive manufacturing, where considerable value-added design, manufacturing and marketing activities support the formation of products and services in transit, the emergence of the Mediterranean Sea as the new gateway of Asia to Europe as well as a bridge to the entire Middle East – North Africa – South East Asia or MENASEA region, causes a significant shift moving the European center of gravity from West to East, from North to South, from the Atlantic to the Mediterranean area.

It should be noted that this is the region, Mediterranean Europe, which is often described as Europe’s “periphery” especially in the current context of the Euro Crisis. Is this an irony loaded with the contradictions of a changing world? Is this a view through the rear-view mirror of History? Will the view ahead reveal a “center” instead of a “periphery?”

Which brings me to the next point, which I would like to share with you. In the richly textured tapestry of History we can observe multiple shifts and alterations between center and periphery. We can see it in the formation and dissolution of empires. We can see it in the constitution of hierarchical versus network-type structures for the production and dissemination of goods and services and knowledge as well as the enabling infrastructures for human prosperity. Ultimately, we observe these shifts in the emergence and evolution of democratic versus despotic systems of governance.

In a world under rapid transition, complexity appears to breed confusion and chaos appears to overtake order. It is difficult to discern emerging patterns and even more difficult to decide the ways forward. This is why we need the power of dialogue. Dialogue requires acknowledging the subjectivity of the “other.” Dialogue requires confronting our fears of fragmentation and conflict. Dialogue requires faith in our collective capacity to achieve unity through diversity, integrity trough difference. All civilizations address the transiency and futility of our individual existence by creating collective purpose and intergenerational meaning. The diversity of cultures and civilizations of the World is today our greatest resource for the future. Dialogue is our best tool for harvesting this great resource.

We in Greece seek to overcome the crisis by harvesting this resource also.  We strive to modernize our economy and reconfigure our productive model through greater integration with the regional and global economy. We work to achieve positive change with social and environmental justice. We respect our partnership with Europe and honor our commitments and responsibilities towards a united Europe.

At the same time we seek to build infrastructures that increase our connectivity with the East and the South. We strongly believe that a new era of prosperity for the region and the world is possible and applaud your substantial contribution to achieve this goal.

Ladies and gentlemen, distinguished participants, Mr. President, thank you for the invitation and best wishes for an enriching and successful 2013 Rhodes Forum.